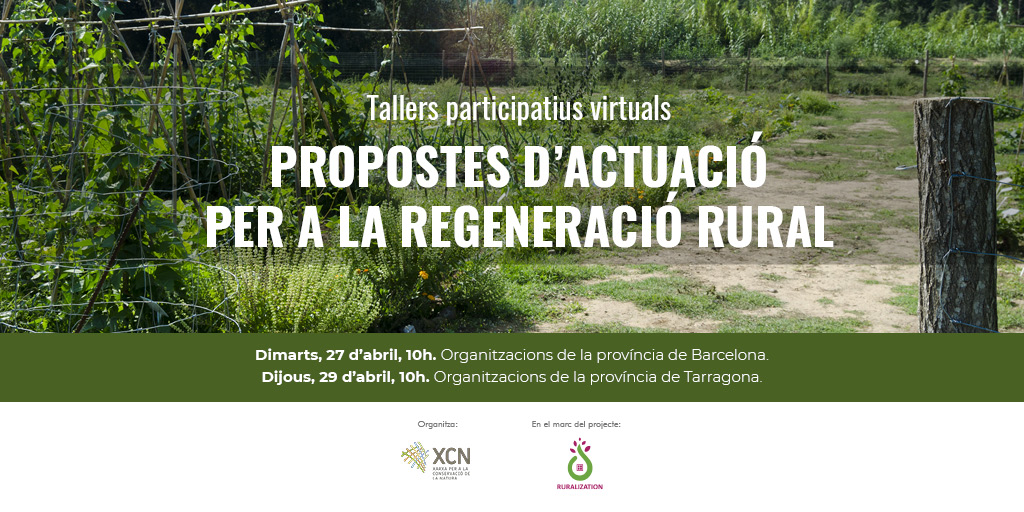 Proposals for action within rural regeneration

The line of work on prospective of the rural environment of the European research and innovation project H2020 Ruralization, and based on the results obtained, from the Xarxa per a la Conservació de la Natura (XCN) organize two participatory workshops for the definition of proposals for action for rural regeneration.

Led by the University of Turku, the objective line of work of this activity has consisted, on the one hand, in the identification and analysis of future trends with potential impact on European rural territories, and on the other hand, in capturing expectations , projects and dreams for the future of European youth with research in which around 200 young Catalans also participated.

The purpose of these workshops is to invite reflection and discussion on the results obtained, aimed at defining action proposals for rural regeneration at the local and regional level. The proposals collected will reach both ARCA, the entity that currently leads the process of defining the Rural Agenda for Catalonia, and the DARP Directorate General for Rural Development. In addition, they will also be made available to participating entities.

Specifically, 2 workshops will be organized in virtual format and in each one two or more rooms will be created to promote the specific discussion of proposals according to the type of territory (rural centers typical of cities and rural centers of a more remote nature).

Due to the conditions of the project, participation in the workshops will be open to organizations from the provinces of Barcelona and Tarragona, linked to municipalities with less than 10,000 inhabitants, and mainly aimed at: technical and elected representatives of the local public administration (City Councils, County Councils and Provincial Council), especially in the areas of occupation, economic promotion, habitat, youth and the environment; the technical centers of the Local Action Groups (LEADER); environmental entities; organizations of the agricultural sector and the rural sphere in general; economic promotion entities; and youth associations.

Tuesday, April 27, 10:00 a.m. Organizations of the province of Barcelona

Thursday, April 29, 10:00 a.m. Organizations of the province of Tarragona

The deadline for registration is April 21. For more information, visit www.xcn.cat or write to mcorrea@xcn.cat