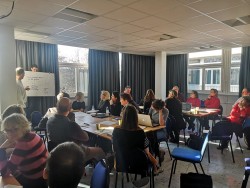 Working session in Paris as part of the Ruralization H2020 project

On January, 20th and 21st, the group of universities and entities that belong to the Ruralization project consortium met in Paris for two intense and stimulating working sessions. These sessions helped to define next steps within the framework of the project during the next year. In this sense, one of the main lines of action to be followed is related to access to land to the new rural generations of young men and women. Furthermore, one of the contributions made so far was focused on the identification and promotion of innovative social practices that make land more accessible to new rural generations.

Terre Liens organization, which shares XCN’s objectives and projects (mainly within the framework of the European Access to Land Network), served as host, promoting debate and teamwork at all times. The meeting started with a general review of the objectives and results that must be archived as part of the framework of this line of research (one of the four that make up the project). Afterward, the organization of the specific tasks to be completed jointly in the following months was discussed.

In this context, the first objective was the qualitative analysis of the legal and political mechanisms that limit the conditions for access to agricultural land. Furthermore, this will be implemented with the assistance of experts in each EU country (including the United Kingdom, despite the upcoming Brexit). It was considered by the Catalan partners (XCN) that this work must serve to break down various legal instruments that are pertinent to Catalonia, such as the recently adopted Llei d’Espais Agraris (Law on Agricultural Spaces). Following the qualitative analysis, a quantitative one will be designed to observe latest trends in the land market (prices and volume of transactions). In any case, XCN will dedicate more attention in the second half of the year to identifying and promoting (formal and informal) innovative social practices that make land more accessible to new rural generations as part of this framework. In this regard, it is time to combine efforts with local entities that already work in this field and have previously collaborated with us, such as l’Escola de Pastors de l’Associació Rurbans or Terra Franca, among others.

Apart from defining the specific tasks that make up this line of action, the meeting in Paris has also helped to update and to share the general vision for the project’s next steps with the rest of the entities. For example, the participatory workshops with young people or case studies on the new generations of farmers. Moreover, the relaxed atmosphere between the working sessions and the meals has allowed us to make further progress in team building and in the construction of a shared vision and strategy. This was not an easy task due to the cultural diversity of the member and the different perspectives of the academic world and the base entities.

Since 2012, XCN has been a member of the project Ruralization, a project financed by the funding program of the European Commission Horizon 2020. The project’s general aims are to promote the return of youth to the rural areas, facilitate access to land, and emphasize agroecology through the analysis of good practices and the support of local authorities to create and implement norms to reactivate the countryside.

These objectives will be achieved through two actions. Firstly, the updating with up-to-date case reports of the book: “Supporting access to land for farmers in Europe” (Access to Land, 2017). Secondly, the development of tools and specific measures in the local context of the participant countries.

The project is currently in the last phase, which focuses on defining tools to create and implement local regulations. These tools will be developed in line with the findings of the previous stages of the project. The last phase ended with the compilation of case studies where good and innovative practices were implemented. These case studies will be used to update the book published in 2012, giving districts more opportunities to implement new practices in their local context.

This 2022 XCN will lead the update of the book about access to land while also participating in the development of specific supporting material for the municipalities of Catalonia.

To archive these two goals, on 22 February, XCN organized a hybrid meeting in Paris with the project partners of Terre de Lien, France, to outline the objectives we wanted to achieve and the methodology.