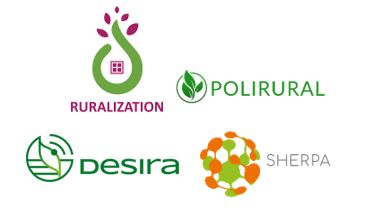 On January 9, 2020, representatives of the RURALIZATION project attended a coordination meeting of a group of Horizon 2020 projects financed under RUR1 and RUR2. This meeting included the presentations of various projects of interest with common objectives:

The point of greatest interest of this meeting was the fact that the network that forms the consortiums of these projects is closely related, so some members were part of more than one, which makes it easier to focus on the main objectives and to have a more unique position.

After a presentation on the current state of affairs, it was presented ideas beyond the projects indicating that Ruralization is a merger of two ideas on demography (generational renewal) in relation to rural development; and access to land.

Among the objectives to be carried out, in which it was decided to work in this meeting, are the prospective analyzes and impact evaluation of the actions and policies.

IIt is worth pointing out that within the action plan on cooperation, a series of formal conferences, cooperations with local events, activities and workshops of special interest will be held. You can check the calendar of these events on the RURALIZATION website.